Hillsboro fielded teams over the years, going by the Sierra Browns and later, the Hillsboro Grays. Teams visited from Albuquerque, Roswell, and Silver City.  Even the New Mexico State University Aggies (then called State College) visited in March 1908.The school paper, The Round Up, in some fine sports reporting by a student, chronicled the train ride to Lake Valley, and the stage coach ride the last 15 miles to Hillsboro. The Sierra Browns traveled to Las Cruces, or should we say, College Station, to play a second game in April. The Aggies won both games. The Round Up archives are searchable, here, offering a wonderful look at college life in years past. http://libcgi.nmsu.edu:8080/RoundUp/jsp/index.jsp

Email ThisBlogThis!Share to TwitterShare to FacebookShare to Pinterest
Labels: recreations 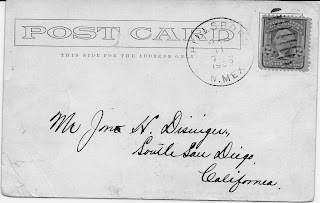 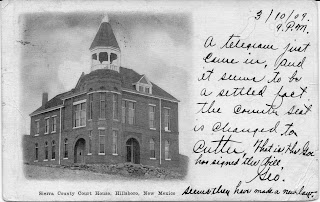 Today you'd email the news, text it, or make a phone call.  In March of 1909, George T. Miller wrote this card to Hillsboro politico, Mr. Disinger, then in San Diego, informing him that the Sierra County seat was moving to Cutter, on the Santa Fe Railroad.  But George Miller had it wrong! Territorial governor (and future Kingston resident) George Curry wouldn't go for it. In Curry's autobiography, he cites that the elected representative, Julian Chaves, had marshaled the bill through the territorial legislature without support of the people, citing a strong desire by a select few to sell town lots at Cutter as the motivation for the bill. Cutter was also associated with a mining fraud, and perhaps at most was populated by 25 people. Hillsboro still had about 1,000 residents. Despite George Miller's assertion, it did not become law. This card has more to say, beneath its black ink. The photo was taken by George T. Miller, and the postcard probably sold in his drug store. He would die just a few months after writing this card, leaving wife Ninette Miller to run the drugstore and take over as postmistress. Representative Chaves would move from his house next door to the Union Church (Miller lived on the other side of the church), to Albuquerque and pass away in five years. Courtesy Black Range Museum.
1 comment: