Primary Sources and Anecdotes on Kingston's Mythical Past

Much has been written about Kingston, New Mexico. Since the 1970s, and perhaps earlier, stories in the popular press are usually ornamented with statements about the tiny berg being the largest town in New Mexico; having three newspapers; two dozen saloons; Twain and President Cleveland visiting.

For several years we've gathered historical information around Hillsboro, Lake Valley and Kingston, and it's oddly the latter where myths arose and persist. Most recently, New Mexico Magazine repeated these myths in a feature story.

Below is a collection of annotated primary sources that are listed in chronological order. Key dates to keep in mind: the east slope of the Black Range was prospected in the late 1870s; Kingston as a town came to life in late 1882. As a place name, it does not exist before August 1882.  In 1893, the federal government changed its monetary policy and over night, the price of silver slumped, and the silver miners moved on.

1882
Kingston is but two months old in this Las Vegas Daily Gazette story.

In October, the Lincoln County Leader reported 350 to 500 people in Kingston.

The Albuquerque Morning Journal reports 50 house built in a day; reporter speculates arrivals could go to 100 persons per day.

The Albuquerque Morning Journal reports only 45 men working in the mines in November.

An estimated 1,200 people are in Kingston in this Albuquerque Morning Journal story.

The Rio Grande Republican reports in November, an estimated 5,000 folks in Kingston.

A correspondent for the Engineering and Mining Journal documented his November 22 visit.

Kingston closes out the year with a party.

1883
This prospectus on Kingston was published in early 1883 by Kingston Tribune editor, Charles Greene. By the end of 1883, he had moved his newspaper to Deming.

The Black Range expected solid growth of Kingston and nearby Percha City.

1884
This McKinney business gazetteer covers Hillsboro and Lake Valley businesses, but Kingston is curiously absent. It's awkward to use, but go to page 1456.

1885
At the often reported height of Kingston's activities and population, this 1885 business journal reveals only 300 people in Kingston, jibing with the 1885 Territorial census that counted 329 people in Kingston and outlying Danville camp. This journal provides an invaluable look at town business, listing names and occupations. Go to page 322, but look elsewhere therein for more details on our area.

1887
Where was President Cleveland when a prankster signed his name on the Victorio Hotel register?

Rev. N.W. Chase penned a letter in 1888 for the cornerstone of the Kingston church, and cites that Kingston had 3,000 people a few years earlier. The original letter (no scan available) is in the Methodist archives in Albuquerque, and a copy is kept at the Black Range Museum.

1890
The U.S. Census Bureau documents 633 people living in Kingston and 816 in the mining district; 37 Chinese people lived in Sierra County (less than 400 over the entire territory).

1891
The Territorial Bureau of Immigration documents a population of 5,132 in Sierra County.

The American Newspaper Directory reveals that the Shaft served a Kingston population of 1,500.

1894
The Territorial Bureau of Immigration documents a population of 1,000 in Kingston.

1904
This February 26, 1904 article from the Silver City Enterprise was misquoted in a story in the Hillsboro Historical Society's newsletter, December 2014.  The 1904 article states that Kingston had a population of 5,000 in the 1880s.  The newsletter article characterized this Enterprise story as there being that many living in Kingston in 1904.

You can find more documentation, census records and newspaper directories, on the Hillsboro Historical Society's Facebook site in the "Photos" section.

You can read about the newspaper that tried to make a go of it in Kingston, in this previous post.

You should read beyond this arcana on the origins of Kingston's mythic population, and check out what some of the territory's newspapers were saying about the area for yourself.  You won't be disappointed. You'll read about the comings and going of folks, the values of the mines, the business successes and failures and an occasional killing. You can read about the newspaper that set up shop under a tree, a photo of which was in the most recent HHS newsletter. That press wasn't Kingston's first. You'll read what the observers saw and thought at the time--and how lucky we are to have that available to us.

Lee and Gilliland to be Tried again

They finally gave in the authorities.  Oliver Lee and Jim Gilliland will be tried for the murder of 8-year-old Henry Fountain in a creative reenactment, two showings on Labor Day weekend, at the Hillsboro Community Center.

Who will determine their guilt?  You.

We're late.  Hillsboro celebrated a birthday on May 22.  You can read about the anniversary in this 1906 Albuquerque newspaper story, below.  You can read the entire page, here.

Stitzel stayed in the area, and is buried in Hillsboro's cemetery. Yankie returned to his natal lands to live out the rest of his life near Hillsboro, Ohio. Yankie survived not one, but two ambushes by Victorio in September 1879. His four-year-old daughter, Evangelina, was abducted by Apaches near Hillsboro in 1878, so said newspaper reports. If you know what became of Dugan, let us know. Comments are open to all.

The February 2014 issue of True West magazine will surely be of interest to Hillsboro and Sierra County historians. The magazine covers Sheriff Pat Garrett and Albert and Henry Fountain's murders.

Oliver Lee and gang are indicted and convicted in the magazine for murdering eight-year-old Henry Fountain. Jim Gilliland who slit young Henry's throat ranched in eastern Sierra County and is buried in Truth or Consequences. The connections to Garrett's murder a decade later are made clear in the magazine.


The stories include Hillsboro judge, Frank W. Parker. Parker presided over the Fountain and Garret murder trials. Parker owned the three lots in town next to the courthouse, including the Miller House and the Union Church. In fact, he donated the lot to build the church in 1892. He later moved to Las Cruces then Santa Fe to serve as Chief Justice of the Supreme Court.

Hillsboro pioneer Nicholas Galles, a Fountain associate, and the father of Sierra County, was a business partner with Judge Parker. Judge Parker was the godfather to Galles' daughter Edith. She married Las Cruces lawyer Mark B. Thompson. It was Thompson who unsuccessfully prosecuted Garrett's accused murderer, Wayne Brazel. And Brazel had something in common with Lee: defense attorney, Albert Bacon Fall. When Fall got in hot water in the Tea Pot Dome Scandal, Thompson was part of his defense team. His grandson, Mark B. Thomson III, is a frequent contributor to this blog.

The True West pieces are compelling stories with compelling photographs that you won't see in the online versions.  These two stories are threaded through Hillsboro. You can read the part of the Garrett story, here, and some of the Fountain story, here.  Get the print magazine at the news stand for the whole picture.

Writer William Pinkney Lawson spent several months on the crest of the Black Range measuring trees for the nascent Gila Forest Reserve, today's Gila National Forest, circa 1912. He turned the experience into a book, The Log of a Timber Cruiser. It was published in 1915.

Though Lawson spent most of his time in the woods high in the Black Range, he writes about a murder in Hillsboro, his observations of an abandoned Kingston, and about some of the personalities he met along the way. Founder of the Forest Service, Gifford Pinchot, called the book a "real record of real things." 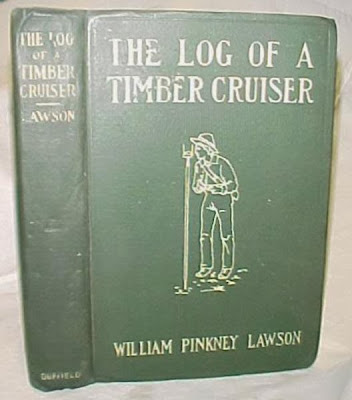 Some of those real things including being treed by a mountain lion, facing the harsh elements, catching Gila trout, and getting cleaned up for a fandango and meeting girls at ranch on Black Canyon.

This is a must-read for a look into life a century ago. You can read the book online. Be sure to type in some local place names in the search box to read what Lawson saw. If you want a copy of your own, try Hillsboro bookseller, Aldo's Attic.
--Craig Springer
2 comments:

The General Land Office surveyed the Kingston townsite in 1887. The town was five years old. The resulting map illustrates where commerce was centered--and no surprises, on Main Street.


The plat shows the position of mining claims that coincide with the townsite, that is, the mining interests beneath the town. The smelter site was on the north edge of town.


The map has another value in showing us today the siting of two businesses, the Printing Office and Photo Gallery, located next door to one another on the west end of town on the north side of Main. Look for lines surveyor's lines and notation that run northwesterly. The gallery was most likely owned by the prodigious photographer J.C. Burge. A good many of his images are archived at the New Mexico History Museum and viewable online.

A couple of curiosities come to the fore looking at the town plat, and the another map of the entire 36-square-mile township map. One, the townsite is rather small; it's only 240 acres. Something else of note, the buildings are few.

If you would like to see the maps in their entirety, click on these links.
Kingston's 240-acre townsite plat map, 1887.
Kingston township map, 1889.
--Craig Springer

Kingston through the Eyes of a Reporter - 1882

Kingston sprung from the wilderness with the finding of silver float. The townsite was platted in the latter part of 1882. The mining activity drew much attention from prospectors, capitalists -- and reporters.

One such journalist writing for the Lone Star offers us a very early glimpse into the economy and life style of the nascent mining camp called Kingston. The writer remarked on title issues associated with the town's lots. Witness this curious remark:  "One woman has taken a lot and built on it and refuses to pay for it. She is not being molested."

The story was reprinted in the October 28, 1882 Lincoln County Leader, published in White Oaks, New Mexico. -- Craig Springer
No comments:

This portion of the 1888 township subdivisional survey plat map shows Gavilan Trail heading over the pass in the Mimbres Mountains. This is likely the trail taken by the U.S. Cavalry and posse on Nana's tail in August 1881.

This was a well worn path. Stephen Watts Kearney and the Army of the West, with Lt. Emory, guided by Kit Carson passed this way in October 1846.  In fact, they camped one night a few miles downslope to the east along Berrenda Creek. Harley Shaw in a previous post on Hillsboro History referenced the published journals of soldiers who made the trek in the Mexican War.  Emory Pass was not used by Kearney, though it commemorates his army's endeavors.

The headwater stem of Macho Creek in sections 30 and 31 is now known as Pollock Creek in memorial to Brady Pollock who was murdered by Geronimo in September 1885.

On the full version of the map, those familiar with the history around Hillsboro, Kingston and Lake Valley will recognize some of the names on the map, those like Knight, Richards, Parks, and Latham.  Parks Ranch, too, is associated Apache depradation. Ranch hand Jacob Hailing was murdered in Ulzana's Raid of November 8, 1885.  -- Craig Springer